This is a story about learning STEM content and practices while making objects. It is also a story about how that learning is contextualized in one young man's disruption of racism simply by trying to learn how gears work. Our project, Investigating STEM Literacies in MakerSpaces (STEMLiMS), focuses on how adults and youth use representations to accomplish tasks in STEM disciplines in formal and informal making spaces (Tucker-Raymond, Gravel, Kohberger, & Browne, 2017). Making is an interdisciplinary endeavor that may involve mechanical and electrical engineering, digital literacies and programming, mathematics and any number of science disciplines depending on the topic of what one is making. At the same time, makers pay attention to aesthetics—the look, feel, and artistic dimensions of their projects—and to the messages or ideas they want to express. Messages in making are important, because they reflect what makers experience and care about.

Tapping into the idea that learning should be personally motivating, organizations including community centers and museums are focusing on encouraging youth to make things they care about with their own hands. Educators in formal settings like schools are excited about making as a modality for learning. When our team spends time in making spaces, we consistently observe the brilliance and tenacity of young people of color engaged in making. Yet people of color continue to be marginalized and underrepresented in STEM and in the new, digitally-connected maker movement (Vossoughi, Hooper, & Escudé, 2016).

Here, we focus on the case of one African American teenager, Nasir (pseudonym), to show how he used multiple literacies in a personally meaningful project to raise social-consciousness, and how that process contributed to his understanding and learning in STEM. We observed Nasir as he tried to build a kinetic sculpture that people would interact with to reflect on tensions between Black Lives Matter and "all lives matter" ideologies. Nasir's example reminds us of the humanity of our youth not only as learners but also as people who participate in, travel across, and carry with them experiences in multiple social spaces. Nasir is learning engineering and STEM literacies through his lived experience as a young Black male.

We met Nasir at the South End Technology Center (SETC) in Boston, MA. SETC is a well-established community center run in the spirit and history of community organizing in Boston communities of color. Among other facilities, SETC houses a fabrication laboratory (fab lab) that contains a band saw, two laser cutters, a vinyl cutter, 3D printers, a large computer- controlled router, and several tools and materials for tinkering and building with electronics.

Nasir had been a Lab Steward and Youth Teacher in the SETC fab lab for four years, teaching community members how to use the tools and working on his own projects. He had also recently participated in a program at SETC called Beyond Ferguson: #makingliberation, which was a direct response to the killing of unarmed African American youth Trayvon Martin and Michael Brown, by a community patrol and by police, respectively; the subsequent demonstrations in Ferguson, MO in response; and the rise of the Black Lives Matter movement (Klimczak, Wallace, & Gaskins, 2016). In the program, youth gathered to talk about issues of racism, injustice, and liberation in their communities and to think about ways in which their participation in a communityoriented fab lab could address those issues. Nasir's design was a closed set of planetary gears in which each smaller gear represented different marginalized ethnic/racial communities (see Figure 1). Nasir explained,

I wanted to show that all lives can't matter until Black lives matter or those that are feeling underrepresented matter. So I had this idea of [a] gear surrounded by four equal gears … basically they all revolve around that central gear to show that … you take out one gear and the project would stop working ... And it won't work until you put it all back in. 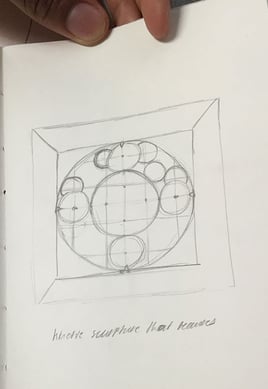 To move from concept to fabrication, Nasir worked through five kinds of representations: (sketches, mathematical equations and notations, vector-based drawings in the Inkscape software, physical prototypes, and professional engineering computer aided design (CAD) software). All the while, he employed his knowledge of digital fabrication, mechanical engineering, and mathematics.

First, Nasir sketched out his idea in his notebook, and while he did not include dimensions in his sketch, he did create proportional representations of the different gears (see Figure 1). He then laser cut a prototype that was made from circles, not gears, to approximate size. Nasir planned to laser cut his gears out of acrylic. He used Inkscape, a program that included a feature for making whole gear shapes and that would allow him to send files to the laser cutter. 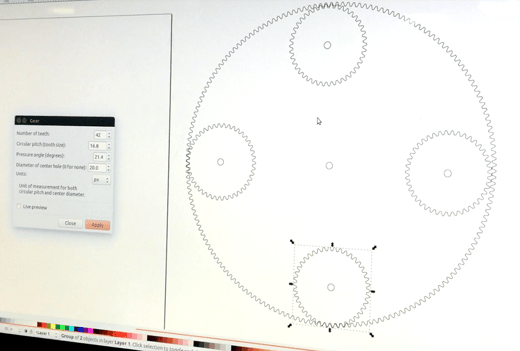 To think both mathematically and aesthetically about the problem, Nasir relied heavily on the representations that were afforded to him through the software program. As he said,

I don't have the exact numbers, but I knew that this gear had to be bigger than these ones, but still smaller than the main one ... I mostly just played around with it, I didn't know the exact numbers ... I believe I divided it (pointing at largest gear) … by four ... I just played around with like the number of teeth, the circular pitch of like say the radius of the circle … Mostly it's the number of teeth … and I was hoping that the number of teeth would match ... then at some point I kind of gave up on just picking the right numbers and I just eyed it ... And then I kept [it] ... where there is little to no space between the [gears]. So it's like a locked system.

Nasir focused his attention first on the mathematical properties of gears, including the relationship between teeth, circular pitch, and radius (variables the software let him manipulate). He also used proportional reasoning to understand their relative size requirements. After trying mathematically to create the system, he "eyed" the images on the screen and created a system in which all of the gears fit within the outside chassis or "main" gear.

He then fabricated the gears on the laser cutter. When he put it all together the gears fit! But, when he went to turn them the gears were too close. That problem created too much friction, and two gears popped out. He decided that he needed to draw gears with a specific number of teeth at specified diameters so that the gear system would work. He needed to go back to the mathematics. To do so, he shifted from Inkscape to CAD software.

“ Nasir focused his attention first on the mathematical properties of gears, including the relationship between teeth, circular pitch, and radius. ”

Nasir did not know how to use the CAD software. He had to learn to use it by requesting the help of a mentor and friend, who was an engineering student at a local college, and by looking up tutorials online. In addition to manipulating the new representational system of the CAD, Nasir was deploying STEM literacies of identifying the right tool for the job, communicating with others in his field, and learning to find information. 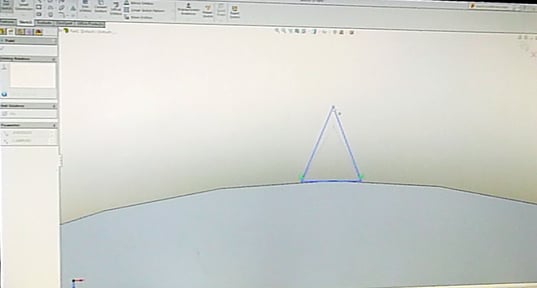 His foray into professional CAD modeling drew his attention to how gears were constructed. At first, he drew a circle and began creating triangles on top of the circle for the gear teeth. It looked similar to what he thought he had seen in Inkscape. But, the straight edges of the little triangles he was drawing for teeth were not flush with the rounded edge of the circle, nor were they one continuous shape (see Figure 3).

So, he and his friend searched YouTube for tutorials and found, that in the CAD program, gears were a series of thin wedge shapes emanating from the center of the circle that included a tooth at the end. The teeth were not triangles but were shaped like tall trapezoids with rounded tops. Nasir represented this difference, and their difference in movement, to us in a sketch (see Figure 4). 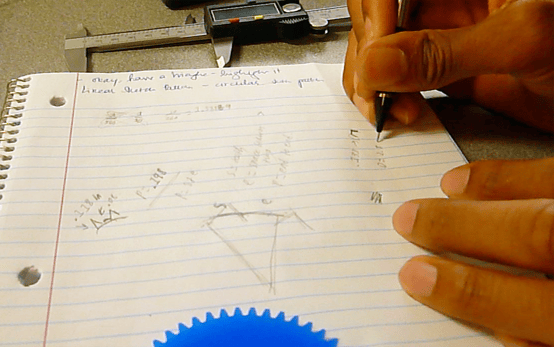 Thus, Nasir's exploration of creating interactive art work about police brutality led to him learning about the geometries of gears and how they were designed. Through this inquiry, Nasir arrived at a place where he could begin to articulate the shape of gear teeth in relation to how they function—that there are gaps between them and curves in their shape, so that they can move more smoothly. His original issue, gears popping out, could now be resolved because of the attention and care he gave to the geometries of gears. He also succeeded because of the literacy practices he engaged—producing representations and moving across them at different times, identifying information, and communicating with others to solve problems. Nasir's learning was supported through multiple channels. He cared about the message of his piece—all lives cannot matter unless Black lives matter. He cared about the aesthetics of his piece, how people would interact with the look, feel, and functionality of it. He was able to explore multiple systems of representation to select the best tool, and he had support from other people. Most importantly he was in a place, SETC, that created an environment that valued and supported his engagement.

We chose Nasir's work to illustrate STEM learning in making because African Americans and other marginalized groups are often blamed for their own underrepresentation in STEM, just as they are often blamed for being killed by police. Nasir's (still unfinished) project disrupted racism both through its content and through his authentic practice of investigating an object fundamental to engineering: gears. Through making he was able to deeply engage with STEM content and literacy practices. He willingly persisted throughout his project, because it was personally meaningful and socially relevant. If educators and other concerned stakeholders are to work toward equity across the lives of our students, then the brilliance, creativity, and ingenuity of African American youth and youth from other marginalized groups must be highlighted and supported. It is our job to create spaces for learning, like SETC, that prove to our children they matter.

" Nasir's exploration of creating interactive art work about police brutality led to him learning about the geometries of gears and how they were designed. Through this inquiry, Nasir arrived at a place where he could begin to articulate the shape of gear teeth in relation to how they function—that there are gaps between them and curves in their shape, so that they can move more smoothly. " 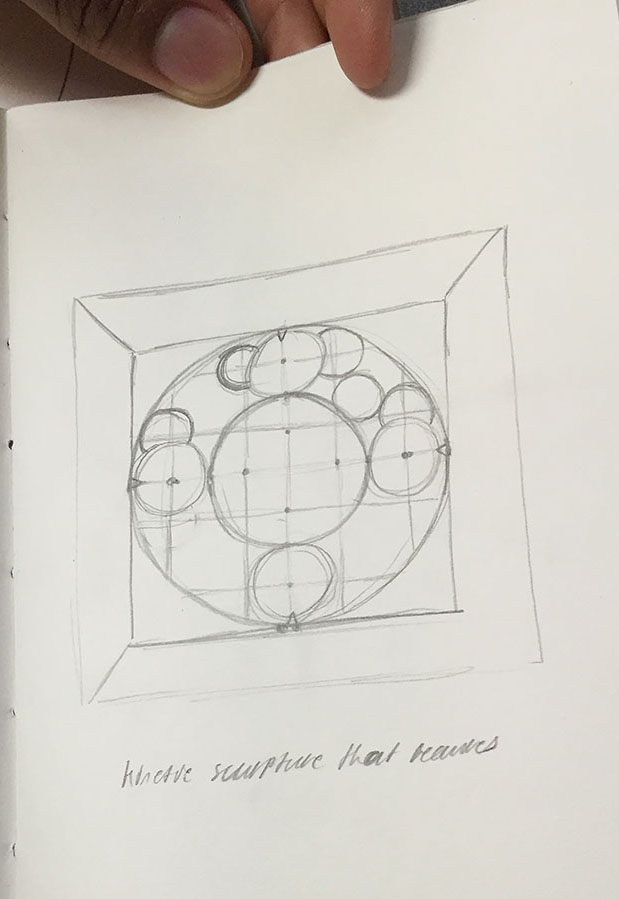 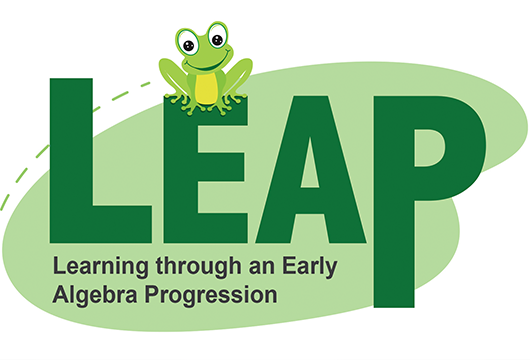 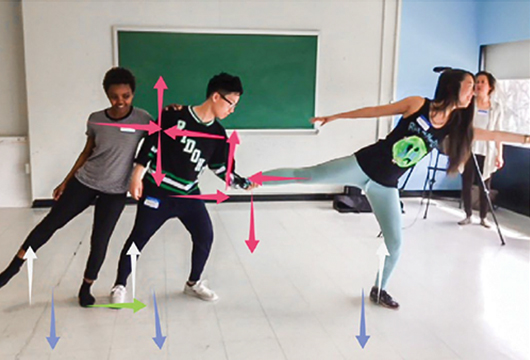 Embodied Learning through Dance and Physics 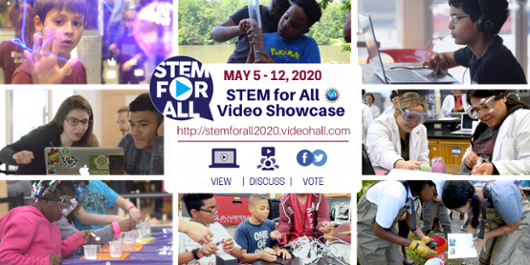 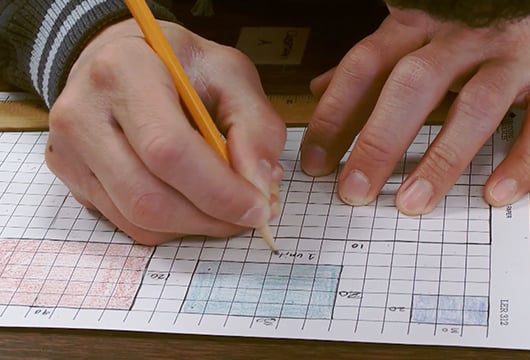 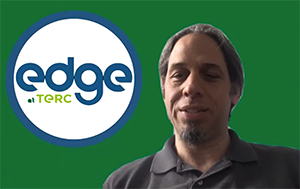 Can Eye Movements Provide a Means of Measuring Implicit Learning of Physics? 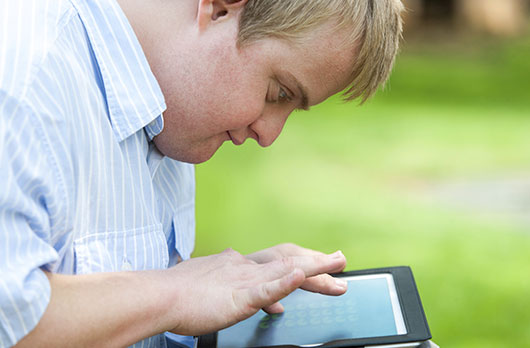